What goes into a shoot - Model's Insight Edition

We’ve been working on a small project that gives a little insight into how our models prepare for a shoot, and how we get the most out of our time together. The big focus here was on allowing and encouraging creativity during the shoot.

Over the past few weeks, I invited 3 of our ID TEAM alumni to a shoot at the same location.  Kenzie and Josi did the shoot at the same time, while Emily did the photoshoot alone. The only information I gave them was that it would be a “Texas summer country vibe”. I didn’t tell them where the location was, or what settings we would be shooting at—to be honest, I hadn’t been there before either. I didn’t do any more preparation or give any other direction about the shoot itself, or the look. I wanted to see what they would do without me “directing” them. I asked them where they wanted to position themselves, and then I set up my lighting and let them do their thing.

I was so impressed that they all came up with totally different, unique photos from the same set. I did give Kenzie & Josi one challenge, since they were there together: each of them had to come up with a way to be different from the other. Meanwhile, Emily had a built-in challenge—she was shooting solo, so there were no examples or ideas from anyone else to draw from. I didn’t even tell her that Kenzie & Josi had shot there already, nor did I show her their pictures beforehand. The whole point of the exercise was to see what each one of them would do at the same location, using their own minds and the location to showcase their creativity, energy and style, I encouraged them to just run with it.

This is what the ID TEAM is all about. We have FUN doing shoots, but we want you to bring your style and personality into your pictures. Learn and trade ideas with each other. It was amazing to witness Kenzie and Josi cheering each other on as they shot. They feed energy and positivity off each other. They push each other, discuss ideas, and give each other feedback.

I purposely did not "sort through" these pictures, so you can see how many awesome pictures we came up with in a short period of time. It was around 100-degrees F…pure Texas summer heat.  If you've ever been in Texas in August, you know what I’m talking about.  These girls are troopers, and fight through any less-than-ideal conditions.  We had a lot of fun.  There was music going, lots of laughing, and a lot of cheering each other on.  I even left the goofy ones in, and some that are less-than-perfect, to give you an insight on what goes into a photoshoot to achieve those few winning images we showcase at the end.

and what they see & do during the shoot

Insight of a Model 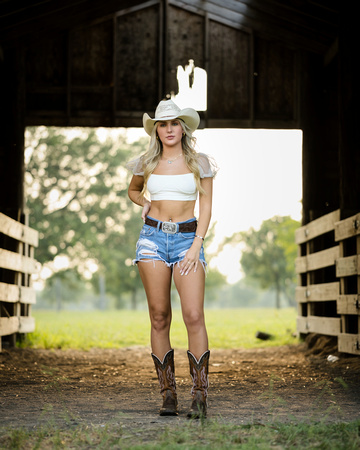